The Six Nations: What Part Do Electronics Play?

Home » The Six Nations: What Part Do Electronics Play?
Previous Next

The Six Nations: What Part Do Electronics Play?

The Six Nations Championship is one of the oldest surviving rugby traditions — and among the best-attended sporting events in the world.

Long gone are the days of old, wooden scoreboards or watching the game on a fuzzy, low-quality TV. See those gigantic screens at the stadium? The ones at the pub? Even the ones in your house?

No matter where you’re watching the games this weekend, chances are you’ll be doing so with the help of electronics — unless you’re lucky enough to get the best seats in the house, of course.

So, with the tournament coming to a close on Saturday, we thought now would be an excellent time to look at electronics and how they have transformed the game of rugby. 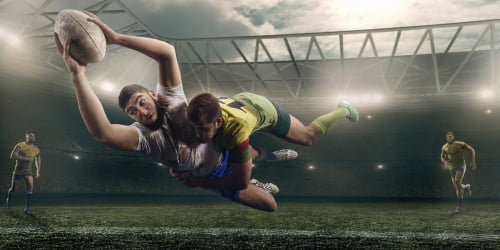 Previously, the TMO had to ask TV producers to rewind coverage to find and analyse specific camera shots. Then in 2015, the RFU welcomed Hawk-Eye’s enhanced video replay into the game for the first time to improve the accuracy of decision making.

But things started to get really interesting in 2019. Both club and international teams began using VR headsets to create simulated rugby scenarios such as lineouts, high balls and first-phase attacks.

During the 2019 Guinness Six Nations Championship, fans had access to never-before-seen insights through new on-screen dynamic stats. These stats provided fans with greater understanding into a range of key in-game events.

In the Rugby World Cup 2019, many players could also be seen wearing tiny monitoring devices on the upper back of their jerseys, which assist coaches with in-game decisions and substitutions, as well as in-depth post-match analysis. These matchbox-sized devices weigh about the same as two AA batteries but are packed with heaps of electronics technology.

The best is yet to come

However, we’ve only just scratched the surface of what electronics can do for the sport. This year, the Six Nations tournament has taken big strides to showcase some more advanced technologies. Take the real-time prediction model, which determines the probability of a successful conversion or penalty kick from anywhere on the pitch.

The machine learning model can be used to compare the real-time success rate prediction of a specific player with the historical success rate for all players. Spectators can then see these stats and a number of other new dynamic statistics on screen which will help fans gain a better understanding of the action, as well as the complexities and nuances of decisions made on and off the pitch.

When it comes to advertising, electronics also make a bold statement. Twickenham Stadium even has an LED-based engagement and advertising system that stretches 0.62 miles around the pitch and middle-tier levels!

An integral part of the game

Rugby is a complex sport. With 30 players on the pitch at any one time, it can be challenging for even the most seasoned referee, coach or fan to keep track of everything that is going on.

But thanks to the technologies mentioned above, fans and coaches alike are now able to better understand the split-second decisions made by the players and referees. Ultimately, this makes for a more accurate and exciting sport.

“Over the past 20 years, rugby has become increasingly open to the use of technology in the game. As a big rugby fan myself, I’m proud to be working in an industry that embraces innovation and plays such an integral part of the sport — for the teams involved as well as the fans.”

So, who will win on Saturday? Our bets (or hopes!) are on England. But no matter the final result, one thing is for sure: rugby will continue to welcome the use of electronics to impact every aspect of the sport in a positive way.

If you’re an OEM looking to start your next sports-led PCB assembly or cable assembly project, get in touch today to find out more about our electronic manufacturing services.

Page load link
We use cookies on our website to give you the most relevant experience by remembering your preferences and repeat visits. By clicking “Accept All”, you consent to the use of ALL the cookies. However, you may visit "Cookie Settings" to provide a controlled consent.
Cookie SettingsAccept All
Manage consent

This website uses cookies to improve your experience while you navigate through the website. Out of these, the cookies that are categorized as necessary are stored on your browser as they are essential for the working of basic functionalities of the website. We also use third-party cookies that help us analyze and understand how you use this website. These cookies will be stored in your browser only with your consent. You also have the option to opt-out of these cookies. But opting out of some of these cookies may affect your browsing experience.
Necessary Always Enabled
Necessary cookies are absolutely essential for the website to function properly. These cookies ensure basic functionalities and security features of the website, anonymously.
Functional
Functional cookies help to perform certain functionalities like sharing the content of the website on social media platforms, collect feedbacks, and other third-party features.
Performance
Performance cookies are used to understand and analyze the key performance indexes of the website which helps in delivering a better user experience for the visitors.
Analytics
Analytical cookies are used to understand how visitors interact with the website. These cookies help provide information on metrics the number of visitors, bounce rate, traffic source, etc.
Advertisement
Advertisement cookies are used to provide visitors with relevant ads and marketing campaigns. These cookies track visitors across websites and collect information to provide customized ads.
Others
Other uncategorized cookies are those that are being analyzed and have not been classified into a category as yet.
SAVE & ACCEPT
Go to Top