The IoT (Internet of Things) already connects many devices. In fact, the concept is growing so rapidly, who knows how many connected devices there will eventually be? 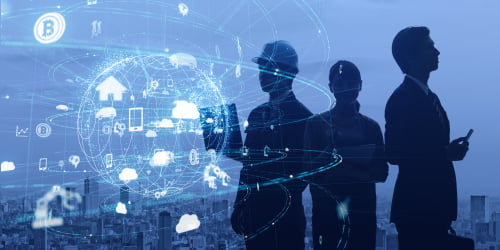 Until recently, these devices have mostly run on the same networks and protocols that support mobile communications and the internet, such as Bluetooth, Wi-Fi and cellular.

Thanks to the well-established infrastructure of base stations worldwide, cellular wireless technologies have held a monopoly position when it comes to connecting devices like computers, phones or tablets directly to the internet without a gateway.

Some of these technologies enable a transmission rate of up to 3.9 Gbps in the downlink and 1.5 Gbps in the uplink. However, the majority of things in the IoT require less than 100 bpm.

For example, distributed devices such as embedded sensors have completely different network requirements than computers or phones. When using the internet, we access large volumes of data at irregular intervals — but remote sensors send small packets of data at regular intervals. Often, these devices will also need to connect in areas away from the traditional infrastructure and a convenient power supply.

So, how do we address the unique network needs of these types of IoT devices?

Turning to an LPWAN

Long-range wireless IoT technologies form the basis for an LPWAN (Low-Power Wide-Area Network). In these types of networks, the protocols are specially designed for long-range capabilities and sending small amounts of data from numerous low-power devices — such as sensor endpoints — at longer intervals.

Sigfox and LoRa-based standards use an unlicensed sub-GHz band (868 MHz in Europe) which has less interference than other protocols such as Bluetooth and Wi-Fi. At those frequencies, signals can penetrate obstacles and travel long distances whilst using relatively little power — perfect for IoT devices, which are often constrained by battery life.

Each standard uses a different technique to minimise transmission power whilst maximising range. Sigfox uses the well-known BPSK modulation technique and ultra-narrowband technology to maximise signal penetration. It is ideal for ranges of 3–10km in built-up urban areas or 30–50km in rural locations.

LoRa is very similar to the Sigfox technology but uses spread-spectrum technology to transmit at a variety of frequencies and data rates — allowing the gateway to adapt to changing conditions and optimise the way it exchanges data with each device.

A key benefit of these LPWAN-based technologies is the cost (particularly when you have multiple devices). Much like with mobile cellular providers, you still have to have a licence. However, the licensing fees are significantly lower; the annual licence fee for LoRa is around about £2,500, whilst Sigfox users can expect to pay up to £10 a year for each end device. Unlike with mobile providers, a SIM card is not required.

These long-range IoT wireless technologies can be used across a range of sensing applications, especially within the medical sector, industrial controls or building management.

A core use is for water temperature monitoring. For example, in hospitals and hotels, every tap and shower needs to be checked frequently to ensure it is hot enough to prevent Legionnaires’ Disease but not so hot that it could scold someone. Rather than having someone check what could potentially be thousands of taps manually, a sensor on the pipe can monitor the temperature and send the data instantly.

On the opposite end of the scale, legislation requires that fridges and freezers in supermarkets or any other commercial setting (such as restaurants) are kept at a specific temperature and monitored. Sensors can also be used here to automate the process and ensure accurate data is received regularly.

Equally, fluids and liquid cases — such as those in oil, waste or septic tanks — need to be measured and carefully monitored, too.

Many of these applications will currently be using conventional 4G. However, if lots of sensors are linked in these types of environment, the connection could be slow and result in loss of functionality and productivity. This could be hugely detrimental in, for example, a hospital setting. In comparison, a lower frequency system can transfer over a lower distance, meaning only one repeater is needed per floor or ward in a hospital.

At EC Electronics, we have vast experience and technical knowledge of working with these types of devices and platforms. Our facilities are LPWAN enabled, and we have antennas at our factories in the UK and Romania — allowing us to test products and communicate with the network directly.

If you would like to make use of these long-range wireless IoT technologies, we can incorporate Sigfox or LoRa modules into your product and test it with your network. To find out more, please get in touch today.